Howdy hey, campers! This week’s blog post is all about survival-related misconceptions, or, to be more specific, stuff that the pop culture wizards in Hollywood would have you believe is accurate, but totally isn’t. In fact, if you follow their advice in a survival situation, it can kill you. Now, I’m not saying no one in Tinseltown ever gets anything right about survivalists and how we work and view the world, nor am I saying that the wrong-headed stuff floating around in the community is all their fault. That’s just not so. Still, when they do throw us a curveball, it tends to be a big one – like telling people to eat the exact opposite of what they should in a true WTSHTF scenario. I love THE WALKING DEAD, but if you think you can just put the sort of stuff in your tank that they all do and be good to go, you won’t have to worry about zombies. You’ll be dead by your own doing before the month is out. Happily, there’s an answer to this most basic of problems, but that comes later. In the meantime, keep reading to learn why some of the most popular survival rations out there are a bust. 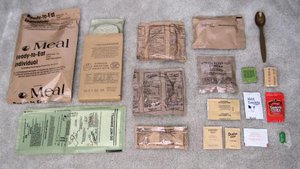 Anyone who’s ever served in the military or spent time in a disaster area has had an MRE (Meal, Ready to Eat). The successor to the C and K Rations – military rations of yesteryear – the modern military mess has fed millions of fighting folks for decades now, not to mention victims of hurricanes, floods, famine, and the like. In fact, you can even buy them on the civilian market for stuff like camping trips and, as their presence in a post like this suggest, as “long-term survival / prepper rations”. There’s a laundry list of MRE deficiencies, but before we get to that, let’s point out their handful of good qualities:

…and that’s it. The bottom line is this: MREs have their place, but a down and dirty, do or die survival situation isn’t it. Here’s why.

MREs are calorie bombs. This isn’t a bad thing in and of itself; a ready store of calorie dense food is a great thing to have around in a TEOTWAWKI-esque environment. What is a problem is the fact that the fat and sodium content of these meals is outrageous. Water and fiber content, meanwhile, is negligible. Further, you have to eat the entire thing in order to reap the caloric benefits. This almost never happens, something which real world usage patterns will show even the casual observer. Check out the nutritional information of the MREs here: http://hprc-online.org/comrad/

Let’s be frank: If you subsist on a diet of MREs for long enough, you will get sick. There’s no wiggle room on this issue. Speaking of issues, want to know what the most common MRE-related maladies are? Extreme gastrointestinal distress, constipation which can sometimes last for days, and eventually, a half hour or so of waste expulsion that’ll make you wish you’d just taken the easy way out and starved yourself to death. The plain and simple fact is…

MREs Are a Stopgap, Not a Solution

What shows like THE WALKING DEAD or your local Army recruiter don’t explain is that survival rations like the MRE are just that: Something you can survive on until you get to someplace with actual food. Ask a Marine or a disaster survivor what they really did with their supply of MREs, and the money is better than good that this is what they’ll say: “We horded the best bits for ourselves, swapped the next best stuff for things we liked more or for things we weren’t quite so tired of, and tossed out the rest. Oh, and we drenched everything in the thoughtfully-provided bottles of Tabasco.”

While no one is going to tell you that a post-collapse world will serve up Continental breakfasts in bed to its inhabitants, it has to be said that MREs are, well, dull. They come in twenty or so variations, but after a week or two, they all start to taste like the foil pouches they were sealed in (hence the complimentary hot sauce). You don’t need a blog post like this one to tell you that if you’re looking at eating a limited range of foods for weeks, months, or even years in the future, you don’t want to get sick of it!

MREs Hurt the Average Person Instead of Helping Them

While this point could realistically be prefaced with an indictment of the so-called “Standard Western Diet” and the accompanying sedentary, zombie-like lifestyle, there’s another side to the coin – anyone living like that (most people!) will be hurt in the long term by MREs rather than being helped. They certainly won’t be nourished. The truth is, the Meal, Ready to Eat is an emergency ration designed for use by the fittest one percent of the population, or thereabouts. In their packaging, they’re heavy, bulky, and ungainly. Out of it, they’re meant to feed the one out of every ten of us who’re being shot at, or humping a 100+ lb. pack over miles of hostile terrain, or running more miles in a day than most of us run in a week, and that’s only if there’s nothing better to be had.

Prepper or not, does the above sound like you? No? Then why eat as if it does? Why waste space in your bug out bag or shelter? Worse yet, why rely on such stuff for long-term survival, a task it was never designed to fulfill?

Still, if you insist upon eating them, consider the following:

MREs Have a Terrible Shelf Life

Like all the perishable food in the supermarket (their closest civilian counterpart), MREs have a short shelf life, measured in weeks if you’re being optimistic. Rick Grimes and the gang may nosh on a gallon of found pudding, but anyone who tries that in real life will probably end up dead, or wishing that they were. Perishable food, commercial or military, just isn’t designed to sit around for the long haul. Stock is rotated out on a regular basis to make room for the fresh stuff, and the old stock is either tossed out or deeply discounted as a last-ditch effort to move it. Again, you could point out the wastefulness of our society if you wanted, and you’d be right, but staying alive when it’s just you against the world – which, if you haven’t figured it out by now, almost never cares whether you live or die – means embracing what is, not what you’d like to see.

All of this to say one thing: If you stock up on canned food, virtually all supermarket stock, and / or MREs, counting on them to be there for you over the weeks and months following a catastrophe, you’re going to be one very hungry, very sorry person.

So, What Am I Supposed to Eat?

Look. No one’s saying having one MRE will kill you. If you’re going on a simple camping trip of 72 hrs or less, go on and pack them if that’s what you want to take. Just know that they’re sub-optimal nutrition, especially over the long term. So, what do you eat in a true, no holds barred survival climate? Real food, that’s what! Hunting and foraging are your best bet – you can get a lot of nutrition out of a deer and some wild plants. Check out this post to get a feel for the kind of weapons you might want to consider using for both hunting and self-defense.

A note on wild plants: If you don’t know what you’re doing, tread with extreme caution when foraging for these! Pick the wrong mushroom, and it won’t matter what you’ve got socked away – you’ll be dead before you ever get the chance to eat it. Mother Nature can keep you alive, but she’ll put you in the ground if you don’t respect her.

The most important thing you’ll need in a survival scenario is a readily available and sustained source of drinkable water. Any situation like the one we’ve been discussing will take an enormous physical toll, and it’ll all come out as sweat. You can live for weeks without food; dehydration will kill the average healthy adult in four or five days.

I know this post might ruffle a few feathers, but it isn’t meant to be hurtful, much less defeatist or overly grim. At the end of the day, though, I’m here to help you guys, not to give you a dose of the warm and fuzzies at the expense of your safety. With that in mind, I’ve got a few ideas for the upcoming weeks percolating in the ol’ brainpan. Stay tuned. Until than, thanks for reading!