In this post you will read about how two recent events have sparked a great interest in survivalism, and how they fit in with current survivalism trends. These two events were the worst natural and financial disasters in recent history respectively. Despite the differences in the type of disaster they both left people destitute, without roofs over their heads, and a desire to improve their self-reliance skills.

Survivalism, which, for the uninitiated, is the philosophy and practice of active preparation for the breakdown of society and an emphasis on self-reliance, has grown from a cult activity into a hugely popular and widespread activity. Like video games and comic books before it, what was once the sole purview of the fringe elements of society now permeates it in a way few ever dreamed of, and for good reason – because we need it to be so. Anyone with access to a television, a radio, or the Internet can tell you how grim things are just beneath the surface (although truthfully, if you’re reading this, you probably tell others about this rather than the other way around!), yet it seems as if most people would rather ignore the signs and proceed as if nothing is amiss. That’s a very dangerous way to live life, but you hardly need an article like this to show you that; very recent history makes a much more compelling case than I ever could. 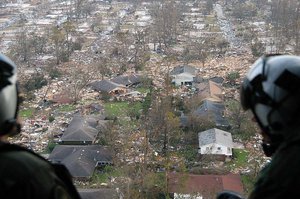 We’ve all heard that old saying about women and their fury, and in 2005, the United States got a taste of just how true that old chestnut can be. More than a decade after its passing, Hurricane Katrina still holds a spot in the record books as the most expensive natural disaster ever to befall the U.S.; costs in 2005 dollars are estimated at ~$108 bn. USD. More costly by far than the monetary damages wrought, however, is the toll in terms of lives – almost two thousand people perished in Katrina’s wake, most of them in the city of New Orleans, Louisiana. Damage was also widespread along the Gulf Coast. Not surprisingly, the self-evident tenuousness of humanity in the face of nature’s fury led to one of the first mass indications of interest in survivalism and related topics. A brief list of related issues for which post-Katrina survivalists sought – and continue to seek – answers and alleviation follows:

Hurricanes and other natural phenomena are bad enough, but when it comes to survivalism and the need for it, it isn’t just Mother Nature we need to look out for – it’s each other. Riots and other man-made salt in the wounds left by natural disasters are always more evident, yet the credit collapse of 2007/08, while often nothing more than numbers on paper and inside computers, proved to be just as devastating, for all its relative invisibility. Years of shady (and in some cases, flatly illegal) lending practices, particularly within the realm of mortgages, banking, and derivatives, caused what economists and historians and politicians now call “The Great Recession”. While 1929 and the stock market crash which made that year infamous still holds the top spot in terms of a purely monetary disaster, the failure of banks, mass defaults on loans by individuals and institutions alike, and an unrelated yet most ill-timed worldwide grain shortage sparked a dark period in American history, one whose shadowy touch can still be felt almost ten years later. What’s more, thanks to the interconnection of global finance, trade, shipping, and other industries, the Great Recession didn’t stay a purely American problem – soon enough, the entire globe was seen to reel and stumble as a result of the worst socioeconomic sucker punch in recent memory. 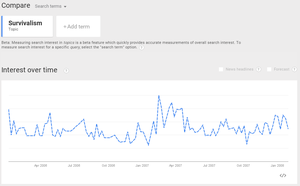 The subprime mortgage crisis sparked a renewed interest in survivalism, and this trend can be shown clearly through Google Trends. As shown in the graph the peak searches for Survivalism happened during the midst of the crisis.

Hurricanes and financial meltdowns and whatever other disasters mankind and Mother Nature might visit upon humanity are a grim fact of life – it’s a matter of when they’ll happen not if. Still, it pays to be optimistic, and if there’s a bright side to such mayhem, it can only be the lessons such crises provide. Survivalism, “prepping”, and related philosophies, as anyone who has felt the sting of being caught out when the hammer finally falls can attest, is an entirely necessary worldview. It isn’t simply a fad taken up by oddballs living on the fringe. It has come at a heavy cost, but more people than ever are beginning to see the light, so to speak. Survivalist forums, television shows, and even entire businesses are cropping up with remarkable speed, their fanbases almost rabid in their devotion. They know, as you hopefully do by now, that the only real security we have is that which we make for ourselves.

Money can become worthless overnight, but hard skills never will. Water and food can be snatched away by the whims of circumstance in the blink of an eye, and it’s your own stockpiles that will keep you fed and watered, not the government or church or whichever outside institution in which you might choose to place your trust. The same goes for clothes and ammunition and tools, all of which are crucial elements to even the most basic survival scenario, not to mention one in which you expect to have a modicum of comfort or protection against animals, the environment, and yes, even the acts of desperate neighbors. Just to reiterate one last time, the ranks of the survival-minded are swelling by the day – the great thing about such groups is, there’s always room for one more! Get in now, while the getting is good. Survivalism is about thriving even under the most extreme duress. Should that day ever come, you’ll be glad you took the time to make a Plan B.