Over the weekend, I had some time to think about the contents of this blog post, and it occurred to me that the only really sustainable and prosperous society is one in which successive generations can count on a baseline of practical education. In other words, you have to have the basics locked down before you can move on to greater heights. Today’s toddlers know how to use an iPad, but ask a group of adults how to change a tire and see how many of them step forward. There’s no doubt that modern technology is amazing, but in a community with a context and a focus like ours, it can turn into a crutch. That’s why this week, I’ve decided to talk about a series of books that a lot of you may not have heard of: The Foxfire Collection. A massive omnibus I’ll often refer to simply as “Foxfire” throughout this post, they’re something I encourage all of you to read and pass on to your friends. For now, though, let’s just take a peek under the proverbial hood so you’ll know what you’re getting into.

The Origins of the Foxfire Collection 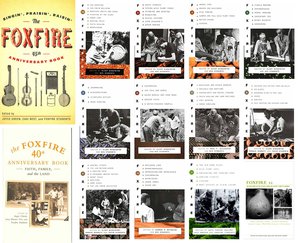 I first ran across these gems in a public library – another endangered species! – but they’ve been around a lot longer than that. Foxfire started out as a magazine back in the Sixties (1966, if you want to be precise about it), with books to follow after. In fact, the books themselves are nothing more than the collected, cleaned up contents of the eponymous magazine. To give you some idea of how much information is just waiting for you to absorb it, the scope and scale of the knowledge contained within the pages of the Foxfire manuscripts is so great that there are currently twelve full-length books in print, not to mention several niche anthologies related to specialized subject areas. Originally, these magazines and the books they spawned were a way for old-time hill folk to pass on their knowledge and skills to the outside world, much of which was mainly oral up to that point. Surprisingly or not, Foxfire swiftly caught on as a sort of counterculture Boy Scout manual for the last of the Flower Children – “The Foxfire Book” started the book series in 1972 – and this “back to the land” survivalist / prepper ethos has stuck with the book all the way up through 2004’s “Foxfire 12”, the most recent installment of the series.

The Goal / Purpose of the Foxfire Books

The goal or purpose of Foxfire both in its individual parts and as a whole collection is simple: To preserve a culture that’s all but extinct while simultaneously passing on a wealth of knowledge and skills to the next generation. The emphasis is on letting the reader learn for himself or herself by experience and personal realization rather than through tests and other modern teaching methods.

What Kind of Stuff Can You Learn From These Books, Anyway?

While the Foxfire collection is a goldmine for folks like us, you have to understand something: These books are just as much a time capsule as they are a survival handbook. Think of them as getting a lesson in trapping from your grandpa – you’ll learn how to snare rabbits, sure, but you’ll also hear a few war stories along the way.

There’s something else you should understand about these books and their relationship to survivalism, too. As much as we might like to adhere to and promote our views, modern life is the way most of us live, with survivalism as a hedge against calamity. A safety net slash hobby, if you will. There’s absolutely nothing wrong with this arrangement – in fact, its existence is a wonderful, vital thing – but the simple truth is that in this day and age, unless you are Amish, you aren’t preparing your own butter or stitching your own clothing or canning your own food as a primary way of life. On the contrary, the folks that provided the source material for Foxfire were doing exactly that. They relied on those skills and many more as part of their daily routine. They were dyed in the wool hillbillies – men and women born and bred in the hardscrabble world of the U.S. Appalachian region. Survivalism wasn’t a trend for them. It was just survival. What I’m trying to say is, if it’s in these books, it’s because it works. Some of the topics or ideas covered might sound funny or quaint or even unnecessary (this is especially true of the contents of the earlier Foxfire books), but don’t let that get in the way! Absorb the wisdom – you’ll be a better prepper for it.

Of course, it’s only natural to ask whether it’s actually worth taking your limited time to peruse these books. After all, can they actually teach you something new after half a century of continuous publication? Judge for yourself! Thanks to their kindness and the historical preservationist bent of these books’ authors, you can read and learn about some or all of the following in the first book alone:

With eleven more books after this one (plus special editions on wine making, holiday topics, and more), you’ll run out of spare reading time long before you run out of things to learn!

What else can I say? The Foxfire books are true treasures. Find them on Amazon or at your public library. Whatever you do, just get your hands on them, and apply the knowledge they contain! Until next week, friends, stay tuned to Facebook and this blog for more SignalSurvival action!