How to Prepare for an EMP

Howdy, gang! It’s that time of the week once again, and with all of the huge summer blockbusters on the horizon, I thought I’d use this week’s blog post as an opportunity to knock together a basic survival guide for one of the most catastrophic events imaginable: The electromagnetic pulse. Also known as an EMP, such an event would be the end of civilization as we know it. The Amish community and certain other fringe elements tinged with strains of Luddite belief would probably be the crowd best situated to weather what would follow, but if you prepare, there’s no reason why you – and the wider survivalist community – can’t do equally well. Anyway, it’s time to get started, so get comfy and grab your reading glasses – and find out how to prepare for an EMP.

What are EMPs? What’s So Bad About Them? 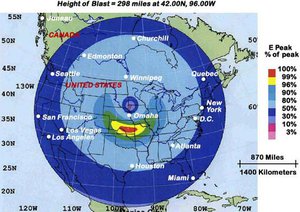 As mentioned above, “EMP” is the acronym for an electromagnetic pulse. These events are sudden, large-scale eruptions or barrages of electromagnetic waves, which are similar to the waves used to power your microwave oven or cellular phone. In ordinary doses, they’re basically non-problematic; millions of these waves circulate through our atmosphere every hour with no visible effect, and humans themselves generate small electromagnetic fields as a consequence of our very existence.

While they’re scarcely noticeable on a normal day, an EMP and the electromagnetic waves it produces can be devastating. For starters, any EMP strike worth the name will be the byproduct of two possible scenarios:

Not to put too fine a point on it, but either of these events would send the world into a precipitous nosedive even without an associated EMP. However, given that an electromagnetic pulse on the scale we’re discussing will kill everything more technologically sophisticated than a loom or a ringer washer, it’s safe to say that anyone left standing will have to face the aftermath of a natural or man-made disaster with, at best, a technological arsenal with an maximum operational date of 1900, +/- 20 years. In other words, the world would be plunged into a technological state not unlike that of the Amish and their contemporaries.

With no modern technology, virtually everything would be worthless. There would be no cars, no central heating or air conditioning, no functional supply lines to carry food and water (or refrigeration to preserve it), no security systems, and no hospitals.

In short, society as we know it will have died in the blink of an eye, with large chunks of the population to follow in short order.

How to Prepare for an EMP

Outside of a global plague or a direct meteor impact, a large-scale natural or artificial electromagnetic pulse is as close as modern humanity is ever likely to get to a genuine extinction event. Estimates vary, but the grimmer ones postulate that nine out of every ten people in the West – that is, the United States and Canada, the constituent countries of Europe, and nations of a similar demographic – would take less than a year to perish. Happily, you don’t have to add to that statistic if you’re reading this blog post! Here’s what you can do to survive and even thrive in the face of an EMP:

Prepare Beforehand: Any survivalist or prepper worth his or her salt knows that solid preparation in advance of trouble that may never arrive makes it immeasurably easier to weather any difficulties that do arise. The first step in surviving an EMP is to prepare for it! Make sure you have ample stores of food and water, a suitable bug out location and well-stocked bug out bag, and a blast-proof method of transportation to get from place to place (a quality road bike or BMX would work, as would a simple pole barge or raft). While making your preparations and plans, there are two important things you should keep in mind: First, it’ll be everyone for themselves for the most part, and second, nothing with even a slight electrical dependency will function.

Go on a Shopping Spree

There will be a tiny window between the actual EMP and the widespread panic that follows it. Use this time to spend your cash while it still has value! Buy staple foods like rice, pasta, and other non-perishables, as well as basic living supplies (toilet tissue, medications / first-aid kids, vitamins, cooking supplies, and so on), and above all, weapons, ammunition and water. It’s a solid bet that you won’t be able to buy everything you want, but something is always better than nothing. On that note, it’s a good idea to keep a reserve of cash on hand, since ATMs, credit cards, and the like will be nothing but scrap at this point. Also, beware other people who may have the same idea as you – panicked people running in survival mode do strange things. Be vigilant and stay safe!

Just because others will adopt a dog eat dog mentality doesn’t mean you have to do the same! If you don’t plan to striking out on your own, you should enlist the aid of like-minded friends and neighbors as soon as you can. In addition to the simple human decency inherent in helping a fellow disaster victim, you might be able to pool your supplies, knowledge, and resources. You’ll be safer and stronger as a coherent unit than as an individual, so seize any chance you have to form one before it’s too late!

Stockpile and Ration Food and Water

Whether you’re alone or in a group, develop a sensible, sustainable ration plan for your available food and water. Times ahead will be lean and uncertain, but they’ll be much less harsh with a cool tongue and a full belly.

Again, it won’t matter whether you’re alone or in a group when it comes time to go to the privy or wash your body, utensils, and so forth. Germs don’t discriminate, which is why you should have a consistent, real world hygiene plan. Allocate enough water for routine tasks like bathing and cleaning, know how you’re going to get rid of your trash (burying and burning are the two most popular options, but don’t forget to re-purpose when possible!), and make sure you can readily sterilize your water and mend your wounds. Sickness will kill you as readily as a bullet, but it’ll be a lot slower – nip it in the bud!

An EMP strike might seem like something fanciful and far-fetched, but it’s anything but. The consequences of such an event will be devastating if it ever occurs, but as a reader of this blog, you’ve now got a better chance than most to weather it well and come out ahead on the other side. Thanks for reading, and see you next week!